We think an imminent peak in inflation will allow central banks to become less aggressive in their rate increases, providing support for equity markets generally, particularly against a backdrop of pervasive pessimism.

Probably the best lead indicator of the recent inflationary surge was M2. (M2 is a calculation of the money supply, and includes cash and savings deposits). US M2 growth peaked at +27% in February 2021 (see Figure 1). 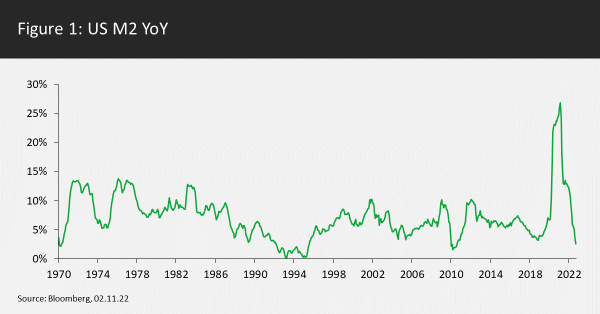 This was nearly twice as high as the peak level hit in the 1970s: +14% in February 1976. If you dump that much money onto the economy at once, it seems fairly reasonable to assume prices will rise, probably a lot. However, the combined effect of the Fed interest rate increases and the start of Quantitative Tightening (QT) have resulted in M2 growth collapsing to 2.6% in September 2022, the lowest level since August 2010.

In addition to money supply, the other major contributor to the surge in inflation was supply chain problems. ISM Prices Paid, a measure of cost inflation in supply chains, hit a 40-year high in June 2021 at 92 (see Figure 2).

This has also slumped, hitting a well below average 47 in October 2022. This is due to a combination of weakening demand and also improved supply.

Slumping money supply growth and easing supply chain cost pressures seem highly likely to put significant downward pressure on inflation, it is just a matter of time. Used car prices in the US are already down -15% from their peak in November 2021. Property rental pressures are also easing. The Zillow Rent Index growth rate peaked at 17% in February 2022, and the growth rate slowed to 11% year on year in September. There have been articles suggesting US rental growth actually turned negative in August on some measures.

These are all early signs that inflation is starting to ease. This will make it easier for central banks to slow their interest rate increases in the coming months.

On China, the well flagged outcome of the Party Congress was met with walls of derision from investors and the (Western) press. The negative spin was that President Xi consolidating his control and filling the Politburo Standing Committee with allies would lead to him taking increasingly anti-market measures which would, in turn, hit the Chinese economy. In effect, there would be no one to control his more dogmatic instincts. Our view is that this is probably a misreading of the situation. In fact, by appointing people he trusts, Xi may find it easier to tackle some of the pressing issues facing the Chinese economy.

Just take the replacement of Li Keqiang as Premier (the effective number two in the Party). Given Li Qiang was appointed to the Politburo Standing Committee and followed President Xi on to the stage at the Congress, he is now widely seen as likely to replace Li Keqiang as Premier when he retires in March 2023.

Up until 2021, most investors saw Li Qiang as a pretty progressive Chinese politician, or at least progressive in terms of the Chinese Communist Party. He was Party Secretary of Shanghai for five years from 2017 to 2022. Shanghai is seen as one of the most free-wheeling and pro-market regions in China. During Li Qiang’s time as Party Secretary, he opened Shanghai Stock Exchange’s STAR market, which was created as a Chinese rival to the Nasdaq, and oversaw Tesla’s investment in its Gigafactory in Shanghai. This is hardly the stuff of a communist zealot. However, opprobrium was heaped onto Li Qiang as a result of the poorly handled lockdown of Shanghai in 2022 which he implemented.

Realistically, in the run up to the Congress, with Xi clearly under pressure to reinforce his strongman credentials to consolidate power, there was no way Xi was going to back off on Zero Covid and, equally, as party Secretary in Shanghai, Li Qiang would have had no option other than to accede to Beijing’s demand for a lockdown to control the spread of Covid. It is important to remember that how you behave in the run up to a once in a five-year political event is probably very different to how you behave in the following years. It is campaigning versus governing. While China is a one-party state, its leaders still have to campaign for internal support.

Arguably, as Premier, Li Qiang will be able to act as a better balance to Xi than Li Keqiang could. This is because Xi trusts Li Qiang; they worked together when Xi was Party Secretary of Zhejiang and Li Qiang was his Chief of Staff from 2004 to 2007. In contrast, Xi never trusted Li Keqiang as he was always seen as Hu Jintau’s man. Li Keqiang was made Premier as part of a bargaining between Xi and Hu’s competing factions in the CCP.

In broad terms, whereas previously Xi was having to balance various power struggles within the Politburo, now he has total control. If Li Keqiang suggested pro-market measures, it was likely that Xi largely ignored him, not wanting to hand a win to a competing faction. If Li Qiang suggests pro-market measures, he may at least be listened to.

Arguably, all this actually frees Xi up in terms of what he does. Equally, he now clearly ‘owns’ all the problems so there can be no deflection of blame onto competing factions. With the Party Congress out of the way, there is only the Annual Legislative Session in March 2023 to go. This is likely to be a rubber-stamping exercise when the decisions made at the Party Congress will be formally implemented, including appointing Li Qiang as Premier.

We think it is likely Xi will now look to boost the economy, which will involve both searching for some way to exit Zero Covid and also measures to support the beleaguered property sector. Unlike in the US, the Chinese authorities are clearly already in stimulus mode – M2 growth has been accelerating since mid-2021 and is now running at 12%, a six-year high. Meanwhile, the Hong Kong stock market is trading like the end of the world is nigh - it is back at levels first hit in 1997. This is an opportunity.

We will finish up with a slide from Bank of America. It shows the percentage of investors who expect a stronger economy in the next 12 months. It is close to a record low (see Figure 3). 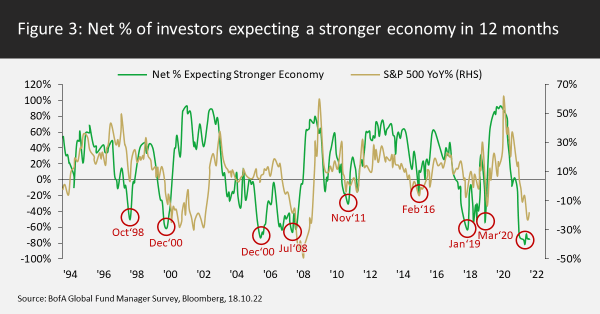 Cyclical shares already seem to be discounting a recession, which is hardly surprising given most investors are expecting one. The market is forward looking.

Past performance is not a guide to future performance. The value of an investment and the income generated from it can fall as well as rise and is not guaranteed. You may get back less than you originally invested. The issue of units/shares in Liontrust Funds may be subject to an initial charge, which will have an impact on the realisable value of the investment, particularly in the short term. Investments should always be considered as long term.

Investment in the Fund involves foreign currencies and may be subject to fluctuations in value due to movements in exchange rates. The Fund may invest in derivatives. The use of derivatives may create leverage or gearing. A relatively small movement in the value of a derivative's underlying investment may have a larger impact, positive or negative, on the value of a fund than if the underlying investment was held instead.

This is a marketing communication. Before making an investment, you should read the relevant Prospectus and the Key Investor Information Document (KIID), which provide full product details including investment charges and risks. These documents can be obtained, free of charge, from www.liontrust.co.uk or direct from Liontrust. Always research your own investments and if you are not a professional investor please consult a regulated financial adviser regarding the suitability of such an investment for you and your personal circumstances.

This should not be construed as advice for investment in any product or security mentioned, an offer to buy or sell units/shares of Funds mentioned, or a solicitation to purchase securities in any company or investment product. Examples of stocks are provided for general information only to demonstrate our investment philosophy. The investment being promoted is for units in a fund, not directly in the underlying assets. It contains information and analysis that is believed to be accurate at the time of publication, but is subject to change without notice. Whilst care has been taken in compiling the content of this document, no representation or warranty, express or implied, is made by Liontrust as to its accuracy or completeness, including for external sources (which may have been used) which have not been verified. It should not be copied, forwarded, reproduced, divulged or otherwise distributed in any form whether by way of fax, email, oral or otherwise, in whole or in part without the express and prior written consent of Liontrust.

Article originally published by Liontrust Asset Management. FE fundinfo is not responsible for its content or accuracy and may not share the author’s views. News and research are not personal recommendations to deal. All investments can fall in value so you could get back less than you invest.